Admit it, when you read ‘Timor-Leste’ on our homepage, you did a quick Google search.

Don’t worry…although Dili, the capital of the Democratic Republic of Timor-Leste is only about 700km northwest of Darwin – far closer than any Australian city – for many people it remains only vaguely at the edge of our minds as a place of war and political violence.

For Shannon French, one of Lospalos’ founders, however, Timor holds a personal connection. As a former soldier in the Australian Army, he served in the ISF forces which restored security in Timor-Leste following the 1999 post-independence ballot violence and protected the UN mission in 2012.

During his time there Shannon developed an emotional connection to the country and its people,

returning to set up Wild Timor Coffee, a fair-trade coffee business that supplies cafes in Melbourne. Through the Wild Timor cafes, Shannon has worked to promote Timorese food, culture and coffee and successfully invested profits back into supporting community initiatives such as water

projects, schools and a birthing centre.

Noticing the prolific coconut palm plantations in Timor, Shannon identified that coconut oil could potentially have similar success to Wild Timor’s coffee as an export product due to the increasing global demand. In 2018, he partnered with Steven Dean, a former Australian Navy Clearance Diver, to found Lospalos Coconut Oil. Together they have personally invested and built the first coconut oil factory in Souro Village, Lospalos, which currently employs 13 people.

In our first two years of operation, we’ve been busy! 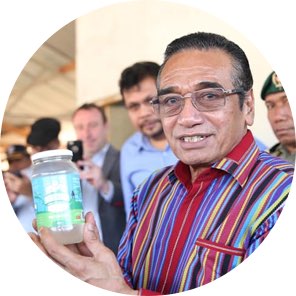